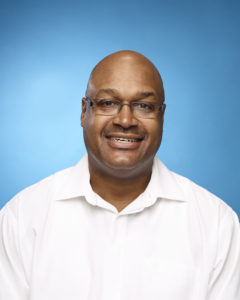 Pastor Tommy Terrell, III (M.Div.) is a native of Washington, DC. He is the twelfth of fourteen children (four brothers and nine sisters). Pastor Terrell accepted Jesus Christ as Lord and Savior on December 31, 1986 and joined New Samaritan Baptist Church. He was later licensed to preach in December 1996 and ordained to the Office of Elder in 2000.

While at New Samaritan he served in many capacities such as First Assistant to Bishop Michael V. Kelsey Sr., the Director of Team Evangelism Ministry, the instructor of the MIT (Ministers In Training) Program and the State Director of Protocol for the Full Gospel Baptist Church Fellowship (DC State).

God has given him a ministry that is both community oriented and based. It has been said if you ever wanted to find him, he would be somewhere trying to impact his community for Jesus Christ. He served as member of the Capitol Heights Think Tank, Community Partner with Capitol Heights Elementary School and served as a Chaplain to the men of Central Union Mission’s Spiritual Transformation Program for many years.

Pastor Terrell received his Bachelor of Arts Degree in Biblical Studies (Pastoral Ministry Emphasis) from the Maple Springs Baptist Bible College and Seminary. He received his Masters of Divinity from Howard University School of Divinity.

He is partnered in life and ministry to Elder Beverly A. Terrell who is also a graduate of Maple Springs Baptist Bible College and Seminary, where she earned a Bachelor of Arts Degree in Biblical Studies (Church Administration Emphasis). She is also a graduate of Howard University School of Divinity, where she received her Masters of Arts in Religious Studies. They are blessed to be the parents of one son, Tommy.