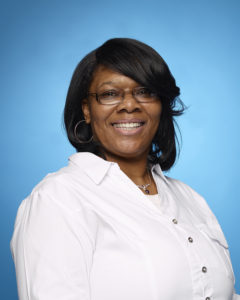 irst Lady Beverly A. Terrell (M.A.R.S.) was born in Washington, D.C. to Willard D. Johnson and Barbara J.G. Johnson. She and her older brother, Victor, were educated in the District of Columbia Public School System. Upon graduating with honors from Calvin Coolidge Senior High School, she attended The University of the District of Columbia.

As a teenager, First Lady Terrell knew that God had something for her to do but did not understand the full extent; therefore, she focused on “preparation”. She accepted Jesus Christ as her Lord and Savior in July 1977 while a member of the Isle of Patmos Baptist Church. While there, she served on the Junior Usher Board and the J.M. Woody Chorale Ensemble.

Alongside her husband, First Lady Terrell worked diligently as they organized the Shechem Covenant Outreach Ministries (SCOM) that was launched in April 8, 2007. Continuing her dedication to God’s work she serves as part of SCOM’s Ministerial Staff, member of the Council of Elders, Chief Financial Officer, Youth Ministry, and the Director of Christian Education.